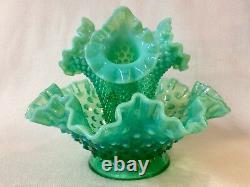 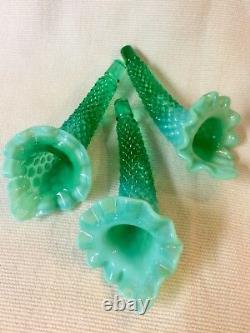 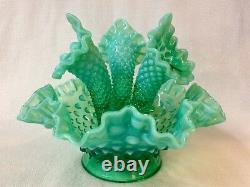 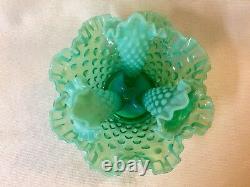 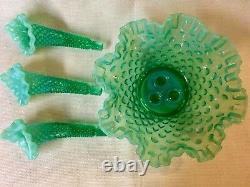 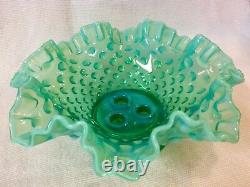 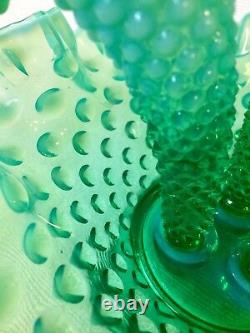 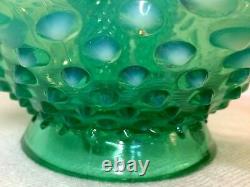 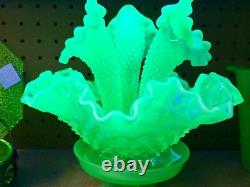 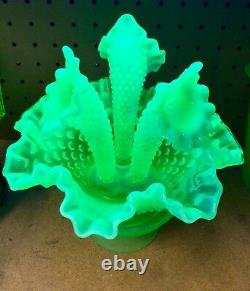 Stunning Emerald Green Opalescent Hobnail Epergne by Fenton Art Glass. Three horns for placing flowers in creative arrangements, lovely for an arrangement on any table or sideboard. Created between 1958 and 1961, the bowl stands 3 5/8" tall and 8 1/2" in diameter.

The horns measure 6each and rest in precision placed holes in the bowl. No chips, cracks or restorations. The original factory was in an old glass factory in Martins Ferry, Ohio in 1905. The factory at one time was owned by the old West Virginia Glass Company. They moved across the Ohio river to Williamstown, West Virginia, and built a factory in 1906. The first year for glass production was 1907. In 1908 John Fenton left the company and founded the Millersburg glass company in Millersburg, OH. Frank Fenton was the designer and decorator. From 1905 to 1920, the designs made there were heavily influenced by two other glass companies: Tiffany and Steuben. But the many different colors were the work of Jacob Rosenthal, a famous glass chemist who is known for developing chocolate and golden agate glass. Towards the end of 1907, the Fenton brothers were the first to introduce carnival glass, which later became a popular collector's item.

[4] During the Great Depression and World War II, Fenton produced practical items (such as mixing bowls and tableware) due to shortages. At the same time, they continued creating new colors.

Towards the end of the Great Depression they also produced perfume bottles for the Wrisley Company in 1938. The bottles were made in French opalescent glass with the hobnail pattern. In the late 1940s, the top three members of Fenton's management died. Frank Fenton and Wilmer C. "Bill" Fenton immediately stepped in and took over the positions of President and Vice President, respectively.

Over the next thirty years, they continued to expand Fenton Art Glass, despite a large number of glass factories closing down. Fenton, Frank's son, took over as President of the company.