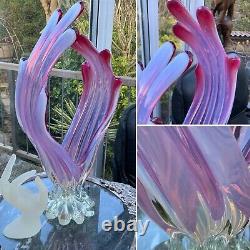 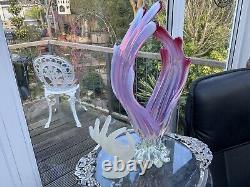 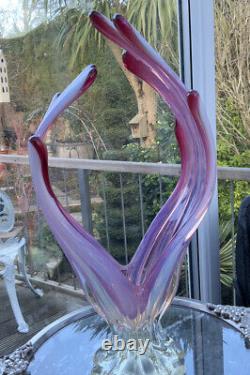 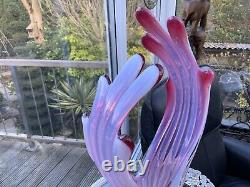 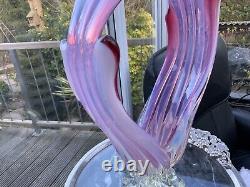 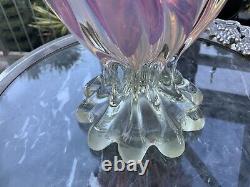 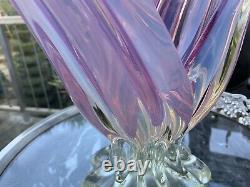 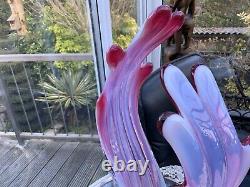 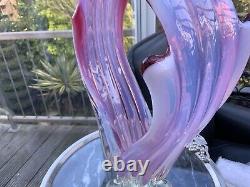 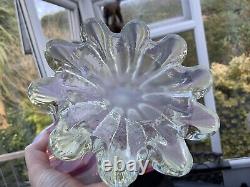 MONUMENTAL CENTREPIECE 15 MURANO OPALINE ALABASTRO ART GLASS SCUPTURE FRATELLI TOSO? Spectacular FRATELLI TOSO or SEGUSO, MURANO Hot Pink Lattimo cased Opaline Alabastro Glass. This listing is for a really MONUMENTAL CENTREPIECE of mid-century Murano glass by Fratelli Toso or maybe Archimede Seguso the Murano master glass artists. There is no signature so I can only point you to look to similar works, readily available to see in other listings. Both of these masters performed these complex processes. The pink is surrounded by blue tinged glass which the opalescence. This type of glass has become a collector's item due to its rarity and absolutely stunning hue.

Handmade in Italy, 1950 / 60s, To have so many of the finest difficulties of glass making in one sculpture is nigh on SENSATIONAL. To say "sensational" is an understatement!!!! I have not seen another.. This magnificent opalescent opaline beauty begins, at the base, in creamy white and cased in clear glass, then gradually and seamlessly grows pinker until it reaches its hot pink fingertips.

The hands have senusously elongated fingers which are like the coming together of hands in prayer or love or closeness... However it appeals to the observer. The base is lobed and clear glass with a large polished pontil mark. Notice the seamless blending (sfumato) of one glass color into another--a key hallmark of the mastery of genuine Murano glass that to this day cannot be duplicated.

A lovely opportunity to give as a special gift for a wedding, anniversary, etc or for a meaningful reminder to pray. MEASUREMENTS: Height 16" tall and 8" in widest diameter X 4 deep.

CONDITION: Excellent with no damage. Lattimo or Milk Glass glass-making technique used to create milky-white opaque glass was known in Ancient Roman times, and after a period of dark ages as Venetian Empire was getting stronger, the baton of Roman glass craftsmanship passed to Venice.

Through experimentation and tireless work the recipe for Lattimo glass was obtained by Murano master glass-makers in the fourteenth century. Later on, Lattimo became very popular because it was a wonderful imitation of the look of Chinese porcelain, a coveted imported good that no-one in Europe could make. Before Europeans learned to make their own porcelain in the eighteenth century, richly decorated milky Murano Glass looking like porcelain was all the rage in European dining rooms and salons for nearly three centuries. So popular was Lattimo glass, that despite tough laws existing on Murano around glass-making trade secrets, the production of this milky-white glass spread beyond Murano and happened also in Bohemia, France, Germany, Spain, and England. Often this glassware was decorated with elaborate colored or polychrome enamel and gold pictures portraying mythological and biblical subjects, pastoral scenes, flowers, animals, birds, geometrical designs, and coats of arms.

For centuries Lattimo plates, sugar bowls, bottles, cups, and various decorative objects graced the dinner services of the wealthy in Venice and beyond. In order to create Lattimo glass a number of ingredients were used, each for its own purpose.

The key ones were the crystal amalgam, which was basically an impure vitreous paste, manganese oxide for bleaching, and tin oxide for clouding the transparent glass to create the matte effect. Later on the production process was enhanced and instead of the tin oxide lead arsenic was used for matting. In modern Lattimo glass the matting agent is calcium fluoride in tiny particles. Murano Glass Carlo ScarpaMilk Glass also opened a new era in Murano Glass production, when it became possible to attribute glassware to particular workshops. As Lattimo glass was in such high demand, the artisans attempted to overtake each other in workmanship, decoration, and details.

Two leading family workshops ultimately emerged in the eighteenth century: Miotti and Bertolini. Bertolini family name enjoyed prominence on Murano, as they were listed in Murano's Golden Book of noble citizens and owned a majolica factory on the island, and they managed to obtain an exclusive right to produce all sorts of Lattimo glass, including transparent, opaque, with and without decoration and gold leaf, for 20 years. This item is in the category "Pottery, Ceramics & Glass\Decorative Pottery, Ceramics & Glass\Figurines".