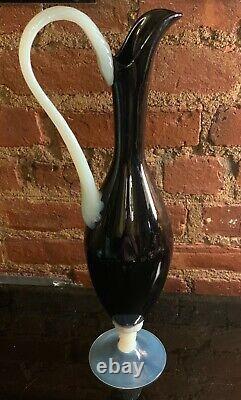 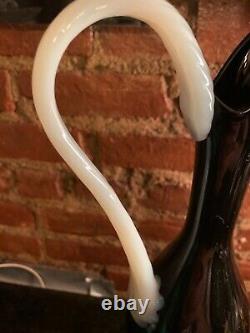 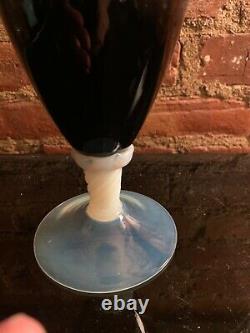 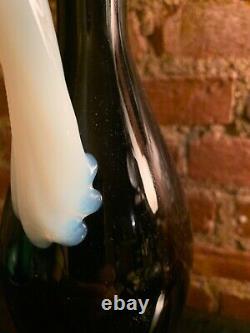 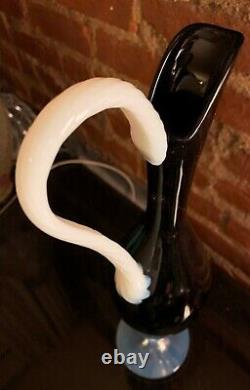 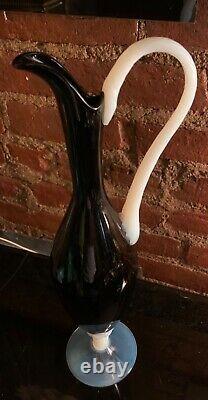 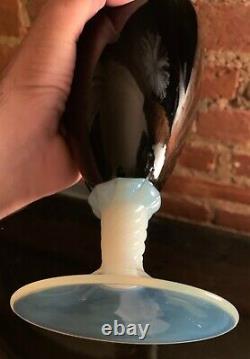 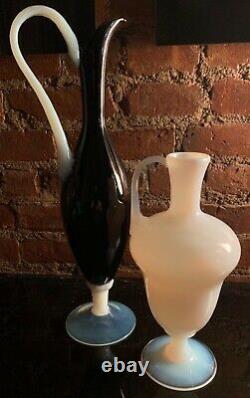 Mid century Modern black Amethyst hand blown glass vase with Opalescent glass handle and base base. The vase been double checked for flaws and there are none. The base is 4 in diameter.

The glass is very clean inside and out, no water marks. This could be Empoli or Guildcraft. I do not know how to tell the difference.

This Vintage ewer, Pitcher or Carafe is very elegant, its clean lines and color combinations make it very current. Beautifully done with a twisted handle and Stem done in Opalescent glass mixed with with the black Amethyst glass. It will be the most beautiful effect on your table, in your bar or in a shop window. No indication of origin, but definitely Italian glass. Please check my other listing for a matching smaller ever all done in Opalescent glass look at the last picture.

Empoli: The Other mid century Italian glass. Mention Italian Glass-especially when discussing mid 20th century modern Italian glass-and virtually everyone's minds immediately leap to Venice and Murano on the northeast coast of Italy. Most collectors and dealers are unaware of another almost equally famous center of Italian glass making known as Empoli. Empoli is a region on the west side of Italy, southwest of Florence in the province of Tuscany. Like its better known counterparts to the northeast, Empoli has been producing and exporting glass since the 14th century.

The Empoli green, known as Empoli Verde: was created from the iron that occurred locally in the sands of the Empoli region. Empoli glass is generally much simpler than other Italian glass and does not have the intricately applied trim or internal decorations associated with Venetian and Murano pieces.

The simple traditional styles of Empoli glass were quickly adapted to the sparse abstract shapes of mid 20th century modernism. The vast majority of mid century-styled Empoli glass was made for the American market. It should be kept in mind that Empoli is a region where there were many glass companies, not one specific glass company.

The great majority of Empoli glass imported into the United States during the 1950s-1960s was marked only with relatively generic "Made in Italy" paper or foil labels. Over time, many of the original labels have fallen off and the majority of Empoli glass in today's market is largely unmarked. Some pieces of Empoli are very similar to shapes and colors made by the American glass maker Blenko.

The color the large lamp in Fig. 1, for example, is very similar to Blenko's mid century amber.

A number of Empoli shapes are also very similar to Blenko shapes. Some of those shapes include a fish vase, leaning tapered decanter, several large bulbous bottles with stoppers, a figural cat decanter with handle and others. There are several ways to separate Italian Empoli glass from American Blenko. First, Empoli glass never has a pontil mark on the base; virtually all Blenko has a pontil. Empoli glass is typically quite thin-walled, not much more than one-eighth of an inch; Blenko generally has thicker walls, usually over one-eighth inch thick. Empoli stoppers and the mouths of the decanters and bottles they fit are smooth, not ground. Finally, all Blenko shapes can be confirmed by their appearance in original Blenko company catalogs.

There is no single source of company catalogs to confirm Empoli shapes. Most Empoli glass is documented by its appearance in the catalogs of American gift importers and retailers.

Opaline glass is also a decorative style of glass. From 1800 to the 1890s, though it reached its peak of popularity during the reign of Napoleon III in the 1850s and 1860s. Or slightly translucent, and can appear either white or brightly colored in shades of green, blue, pink, black, lavender and yellow.

The glass has a high lead content which defined it as "demi-crystal" or semi-crystal. The primary influences on this style of glass were 16th century Venetian.

And English white glass produced in 18th-century Bristol. Many different pieces were produced in opaline glass, including vases, bowls, cups, coupes, decanters, perfume bottles, boxes, clocks and other implements. The popularity of Opaline glass began during the reign of Napoleon. Cities involved in the production included Le Creusot.

As well as various locations in England. All opaline glass is hand-blown and has a rough or polished pontil on the bottom. There are no seams and no machine engraving. Many pieces of opaline glass are decorated with gilding. Some with handpainted flowers or birds.

Mounts, rims, hinges or holders. Real opaline glass was produced only in France. In the 20th century Italy produced a similar glass and called it opaline veritable. Most opaline glass is not branded or signed. This item is in the category "Pottery & Glass\Decorative Pottery & Glassware\Vases".